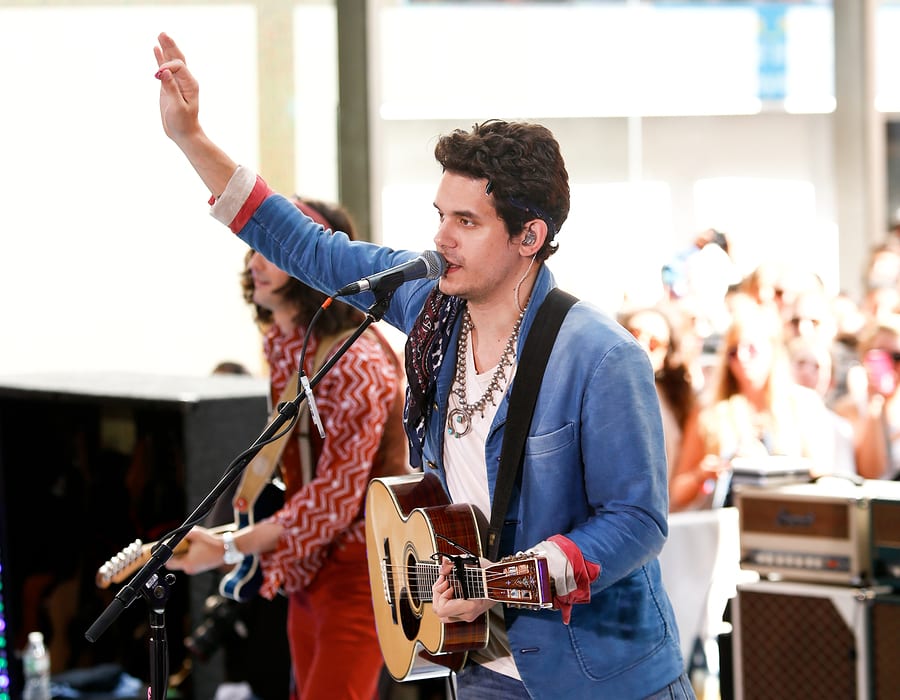 Pop singer and guitarist John Mayer has been making healthier lifestyle choices and has started to see the benefits of his positive changes. He announced to his fans on Twitter that he gave up drinking a year ago and has seen his life improve as a result. Sober John Mayer made the announcement partly as a message to anyone who feels that they want to take a break from alcohol and get back on track.

Mayer admitted that his choice to give up alcohol was a very personal thing for him but he was proud to tell his 1.2 million followers about his one year anniversary of going without drinking. The singer has confessed that he is not completely sober as he decided to replace his alcohol consumption with marijuana. Although he may not be completely drug free Mayer says that his quality of life has improved with the change because drinking was causing problems for him.

Mayer has had his fair share of ups and downs that may have contributed to his drinking which he says became difficult to control. He spoke about his alcohol use in a Rolling Stone interview, saying that he tried to regulate the amount but always felt that his drinking went overboard. His trouble with moderating would lead to more and more drinks, something that he said always felt wrong.

A few years ago, John Mayer was diagnosed with a throat condition called granuloma that forced him to take a hiatus from singing while he recovered. His condition was at least partially caused by his alcohol consumption and his “love of scotch” as he admitted on a talk show. When his health began to suffer he was forced to back out of live appearances and delay the completion of an album he was working on.

In order to improve issues with his throat, Mayer had two surgeries on his vocal cords. Following the surgeries, he found that almost everything changed about his voice and he had to adjust. He lost some of his ability to project his vocals and even his speaking voice changed as well.

His health issues were one of the many reasons he gave up drinking as he needed to spare his throat from any further damage. Mayer also had relationship issues with his on and off again girlfriend Katy Perry from whom he finally split last year. He wrote a song about their difficult breakup called “Still Feel Like Your Man” because he felt that their relationship had made a big impact on him.

John Mayer’s career and imaged also suffered after some interviews which did not show him in the best light to his fans. In 2012 he gave some infamous interviews to Rolling Stone and Playboy in which he described his relationship with former girlfriend Jessica Simpson. He likened the relationship to an addiction and spoke a little too candidly about their sex life.

Mayer also made some controversial statements about race when discussing his African American audience and his preference for caucasian women. His interview sparked some debate on social media with many people expressing disapproval about his language and attitude. John Mayer sober now feels embarrassed about these interviews and understands now how out of touch he was without even realizing it.

The controversy combined with the singer’s health issues and struggles in his personal life caused him to step out of the limelight for a period of time. He eventually decided to start making better choices and try to be a better person.

Following all of these issues and his choice to quit drinking, Mayer has been doing much better with his career. He released an album this year called “The Search for Everything” and has started dating again using exclusive online apps. He has managed to improve his health and is working to get his career on track.

He started writing music for the album in 2014 after he had taken some time off from music. At that point he finally felt ready to start being involved in music again and grow back into his career as a musician and songwriter. He has also started going to therapy to work on his issues with attachment as he approaches his 40th birthday.

His choice to quit drinking was an adjustment but one that he says is a “constant return on investment”. His alcohol use was something that damaged his voice and became a force in his life that he couldn’t control.

John Mayer sober went public about his choice to get drinking to hopefully inspire fans to make the same decision if they are struggling. He wanted people to know that quitting completely or just taking a break is an option that they have whenever it becomes too much.