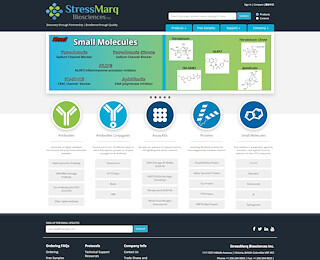 Studies of the brain have shown that various proteins are to blame for the degeneration of brain cells associated with diseases such as Parkinson’s and Alzheimer’s. Chief among these proteins are Lewy bodies, which are closely related to the alpha synuclein protein. This protein is heavily linked to Parkinson's disease.

StressMarq Biosciences Inc. develops proteins that have proved useful in many neuropathy research projects. Our proteins provide an area for experiments outside the human body while researchers try to unravel the many unknowns surrounding brain diseases.

What are Lewy Bodies?

Lewy bodies are clumps of proteins that form in certain parts of the brain. These areas include the brainstem, which is the posterior part of the brain that consists of the medulla oblongata of the hindbrain, and the midbrain. The bodies can also be found in the cerebral cortex, limbic cortex, and the hippocampus.

These proteins are usually alpha-synuclein proteins and may sometime include Tau proteins. The bodies are surrounded by neurofibrillary tangles, which affect how neurons in the brain work.

Lewy bodies have been found to particularly affect neurons that are responsible for the production of two neurotransmitters, dopamine, and acetylcholine. Dopamine sends messages between nerve cells in the brain to facilitate bodily functions such as movement, cognition, mood, and sleep. Acetylcholine affects memory and learning. When there’s an accumulation of Lewy bodies, nerve cells in the affected regions of the brain die, affecting a huge percentage of brain function.

Factors that Increase the Risk of Lewy Body Dementia

Lewy Body Dementia (LBD) refers to the type of dementia brought about by the presence of these bodies in the brain. Risk factors of the disease have been identified as age, genetics, and sex.

Men are more susceptible to LBD compared to women, while most new cases are observed between the ages of 50 and 85.

What are the Symptoms of LBD Dementia?

Most of LBD’s symptoms are similar to those of Parkinson’s. They involve problems with movement coordination, thinking ability, and memory. Other symptoms include:

Research Today for A Better Tomorrow

The LBD treatment options available in medicine can only decrease the severity of symptoms, but not cure the disease. Further research into the proteins involved in the accumulation of Lewy bodies in brain tissue, however, holds the promise of breakthroughs into more effective treatments. Among our products at StressMarq Biosciences Inc. is the alpha synuclein protein. It is one of the most important reagents in studying the biology of Lewy bodies. Call us today on +1 250 294-9065 for any questions regarding our research products.