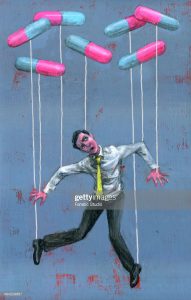 Drug addiction, in my opinion, is an illness that affects a person’s mind, behavior, learning abilities, judgement, decision-making and memory and leads to losing control over usage of illegal or legal substances. When addicted to drugs, they become a number one priority.

Growing up I was exposed to drugs because of my parents. They would leave pills laying around, burnt spoons laying around and even smoked substances around my sister and I. Of course they didn’t think we knew what it was because we were so young but we knew something wasn’t right. My dad was a very heavy drinker and had to have at least four beers a day or else he would be irritated and would experience withdrawals. Although I didn’t know all the drugs they were using, I told myself I would never follow in their footsteps but sadly once I experimented, I quickly became addicted.

There are five stages in addiction. The first stage is experimentation. Lots of addicts started using in their teenage years because of their curiosity of drugs. Once they have experimented, the desire to use it again increases. The second stage of addiction is regular use. Once experiencing a high, people crave to feel it again which leads to using it frequently. The next stage of addiction is risk-taking use. Using any drug has natural risks such as a person’s health, thinking patterns and behavior. When someone uses a drug for a while, their tolerance builds up meaning they have to take more to experience a high. Oftentimes this leads to overdose because the body can handle the amount taken. The next stage of addiction is dependence. Dependence is having to rely on something or someone for some kind of feeling or control. When someone uses substances regularly, it becomes miserable to be sober. The last stage is addiction. Addiction in my opinion is one of the hardest things to overcome. Not only does it take immense strength, but it takes motivation and determination.

When I was a freshman in high school, I started off using marijuana, alcohol, and nicotine. I got hooked on nicotine so fast but at the time I denied I was addicted because I was in denial. I had no interest in quitting even if that meant sacrificing my health and relationships with my family. I started to get impulsive and do things I normally would not have done such as running away, hitting and punching things, getting into fights, arguing excessively with my grandma, and disobeying authority. When I met one of my ex-boyfriends, I started to use LSD, mushrooms, oxy, coke, molly, ecstasy, Xanax, Adderall, meth, and different forms of marijuana. I became obsessed with my everyday life of partying. I was hooked the worst on meth and nicotine. I forgot about everything that was once important to me. The morals I once had were no longer my morals.

I never thought about the pain I put my family and friends in. They worried every day that it could be my last day on Earth. I’m not perfect to this day and I’ve relapsed many times but that is often a part of a process. My addictions have taught me many lessons. When I went to rehab, I didn’t realize how lost I was. I looked in the mirror and didn’t know myself. The disappointment from my family and myself weighed me down and I became depressed. I missed the drugs. I missed being ‘happy’ and getting the lively and amazing rush I got from using.

Although I was charged for possession of marijuana, I am fully aware of the dangers of addiction and I’ve lived that life myself. I now understand the struggle people go through with trying to quit. Many people think addicts are people who lack morals and willpower and they could simply quit if they chose to but no one who has been an addict will understand how truly hard it is. Addiction affects not just bums on the side of the road but people who have a positive influence in society.

A combination of factors can lead to addiction. For example, biology. Drug addiction has run on both sides of my family for many generations which make me more susceptible to becoming addicted. According to an article, gender, ethnicity, and the presence of mental disorders can also influence the risk for addiction. Family, friends, economic positions, and general quality of life all have an impact on a person’s environment. Peer pressure, physical abuse, sexual abuse, early drug exposure, stress, and parental supervision can all have a significant impact on a person’s chance of drug use and addiction as well. Addiction risk is influenced not only by genetic and environmental variables, but also important developmental phases in a person’s life. Although drug use can lead to addiction at any age, the earlier drug use begins, the more probable it is to lead to addiction. This is especially troubling for teenagers. Teens may be more prone to dangerous behaviors since parts of their brains that control decision-making, judgment, and self-control are still growing.

As with most other chronic diseases, such as diabetes, asthma, or heart disease, treatment for drug addiction generally isn’t a cure. However, addiction is treatable and can be successfully managed. People who are recovering from an addiction will be at risk for relapse for years and possibly for their whole lives. Research shows that combining addiction treatment medicines with behavioral therapy ensures the best chance of success for most patients. Treatment approaches tailored to each patient’s drug use patterns and any co-occurring medical, mental, and social problems can lead to continued recovery.