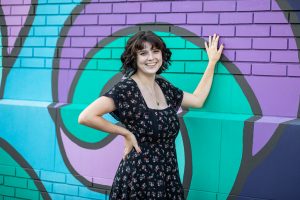 Click, I begin to move back. Click, I feel the ball of excitement unwind in my stomach. Click, I see the ground straight below me knowing what is about to come. Zoom, I soar through the air on the best rollercoaster in the entire world. Now, this wasn’t truly a rollercoaster, I was simply on a swing in my backyard. I wasn’t being pulled up the tracks by conveyor belts, instead my dad was pulling me up high to push me on the swing. Of course, this didn’t matter, because my dad made it seem like I was truly on a rollercoaster. As I flew through the air I felt free. I had no reason to worry about falling because I knew my dad would be there to catch me; until one day, he wasn’t, and I was left to wipe the dirt off my knees all alone.

My dad was always the embodiment of what a dad should be. When I bought him cups adorned with the words “world’s best dad”, I truly meant it. He was absolutely perfect, until he wasn’t. Eventually he started to get aggressive. He got worse and worse until the love in his eyes was gone, and all you could see was anger. He became an inferno of hate, anger, and pain that destroyed everything in his path. Eventually the inferno consumed him, when he overdosed on heroin when I was fifteen. Of course, heroin took his life from him far before he overdosed. It tore apart all the light in his life until all that was left was darkness. Heroin not only destroyed his life, but destroyed the lives of those closest to him. My mom lost the man she fell in love with at the age of fifteen. My grandma lost the little boy she loved and raised. I lost not only my dad, but my teacher, mentor, and best friend.

I wish I was the only one who ever had to experience losing a loved one to addiction, but unfortunately I am not. One out of every ten people in the United States struggle with drug addiction, with only 10% of these individuals receiving treatment; however, these individuals aren’t the only ones affected by addiction. Addiction hurts the loved ones of a drug addict. Their lives become unpredictable, anxiety-filled, and full of anger. Addiction also adds a great burden to communities. High drug use in communities causes more violence, with 41% of violent crimes relating to drugs. Areas with high drug usage have teens dropping out of high school at a much higher rate, which costs the United States hundreds of billions of dollars a year. One of the biggest areas affected by substance abuse is the criminal justice system. One out of every five incarcerated individuals are serving time on drug related charges. The recidivism rate for people incarcerated on drug related offenses is 68%, which is 18% higher than the national average. There are two major ways for our society to help decrease the severity of its drug abuse problem: reform and education.

One of the biggest reasons drug use remains so prevalent in the United States is that we treat drug addicts as criminals. The truth is, substance abuse is a disease. Putting someone in jail for being addicted to drugs is like telling a cancer patient, “treatment isn’t necessary, we’re hoping it will go away on its own.” Of course, hoping cancer goes away, doesn’t make it go away, just like sending a drug addict to jail doesn’t make them any less of a drug addict. If instead of sending drug addicts to jail, we sent them to rehab, we would see a decrease in not only substance abuse, but incarceration, violent crimes, and high school dropouts. Rehab would offer drug addicts the opportunity for a better life, not only for themselves, but for their loved ones.

Another important aspect of decreasing drug abuse in our country is education. The war on drugs President Nixon started in the 1970s has caused our education system to practically ignore drug abuse. Programs like D.A.R.E. don’t do anything but tell kids that drugs are bad, and you shouldn’t do them. These programs don’t provide kids with the resources to actually prevent drug addiction, nor the tools they need if they do struggle with substance abuse. If we want to see a decrease of drug use in schools, and in our communities, we need to prioritize educating people about substance abuse. Not only do kids need better drug education in schools, but society needs to stop the ongoing trend of blaming drug addicts for their disease. If substance abuse is viewed as something that needs to be treated, not punished, drug addicts are more likely to get the help they need.