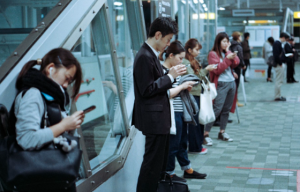 It can be said without fear that during the Covid-19 period, people from all walks of life forced to stay at home to keep themselves safe from pandemic. Meantime, majority of the people had faced several addiction problems especially smartphone addicted. I do believe that we as a nation are dealing with this addiction crisis when everyone is acting like phubber in everywhere at any time such as jogging, driving, eating, and sleeping, this habit had rolled in and covered every corner of everybody’s life. However, due to the boredom among pandemic period, this habit has indirectly become worse, and more time is spent without any realization. As a saying goes time is money, ignoring the addicted bad habit not only consume more time in the future but also might cause different health problem as well as plenty of social issues.

The consequences of smartphone addicts for individual should be aware by all mankind because this addict’s behavior is slowly affecting one’s life in all perspective. First and foremost, the productivity from individual will massively decreases. This is due to the reason if an individual spent most of the time in scrolling phone to watch all pointless video, procrastination will indirectly become another problem for oneself. Therefore, more work will be delayed including housework, schoolwork, and work from company.

When all the work is undone and in the rush at the same time, individual forced to take imbalance lifestyle such as having meal at dawn, sleep deprivation, or burn the midnight oil. Reason behind this is when everything is undone and the deadline is approaching, people will lose calm easily and extra stress which will lead them to think negatively and eat aggressively to deal with stress. Researcher (Andrew, G. 2017) mentioned smartphone addiction causing imbalance life as well as to brain. Also, they will be reluctant to sleep according to common schedule because they are anxious and dismayed to all the problem they are facing.

Moreover, this will lead to another consequence which is mentally and physically health become frail. When oneself stay in unhealthy lifestyle like obesity and sleep deprivation, more problems occur. The most blatant example including high blood pressure, insomnia, anxiety, diabetes, heart attack, and depression. These all problems came altogether when people do not take care their mentally and physical health. Smartphone addicts no longer just a bad habit but also creating a chain effect into one’s life, without doubt if the situation get worse will lead to death. Yuki, N. (2019) stated that during the pandemic many Americans gained serious weight in the period because of different factors and stress is one of it. Hence, this research proved that majority of the people is developing different kind of addiction and neglect their lifestyle so that obesity problem keeps increasing.

In the perspective of society, the consequences from individual will directly increase the danger into society problems. To further illustrate this point, bad grade in school and bad performance in work is due to the problem of lacking productivity from smartphone addiction problem. This is due to the fact that student studying from home or adult working from home are lacking supervise and inspect from the others such as teacher and manager. So, the chance of playing with phone increase and eventually makes bad performance. This consequence will affect social image in macro perspective because the school and company are keeping the performance low during the pandemic.

Moreover, Bad mental and physical health lead oneself easier to act unreasonable and lost control, eventually more problem like domestic violence happened. With bad health condition not only makes internal problems among family but also external problem like get affected easily with poor resistance from body and increase the speed of spreading virus which will drag the efficiency of government to solve society problems. For giving an example, if oneself is dealing with stress and depression because of smartphone addiction, it is difficult for an individual to act calmly and solve thing in a positive way, Instead, they will choose the easiest way to get rid of problems even they need to pick the bad decision like violence not educate.

There are several ways we can remedy the crisis on both individual and society level. One of the most important notes is to understand the bad habit existing in our day-to-day basis. People lost control in addiction because they have no idea what is going on therefore, they couldn’t find a way to solve it. Hence, knowing the vicious cycle routine is significant, the core problem from phone addicted is the reinforcer content that will stimulate people to keep scrolling. This is considering the fact whenever people get stimulated, they try to look for more similar reinforcer to get more stimulation because these reinforcers will make them emotionally excited. Unfortunately, they spent all daytime in looking for next little reinforcer from smartphone instead of doing something meaningful to get same kind of reinforcer. Then, they will continue the vicious cycle without knowing the situation, which is scrolling their smartphone, get into stimulated content, back to the boredom, look for more reinforcer content.

After understanding the situation individual be in, the next step is the execute good habit and make addicted habit difficult. The best example to elaborate this point is my addiction life toward smartphone, I used to be so addicted in scrolling smartphone that I can just wake up and looking to my phone for 9 hours then ready to sleep again. There is nothing too attractive inside the phone, but I will still spend most of my time unaware watching pointless videos. When I finally realized how toxic the routine is and how much time I wasted doing nothing but just head down and being a phubber, the first thing I did is to make the bad habit difficult in different way. For example, I will install apps to limit my freedom in using phone while studying such as forest app stopping me switching window when study mode started. Then, I will also delete my social media that only for entertainment to reduce the distracting factor from the social media apps like deleting Instagram and Facebook. After that, implementing good habit is most effective way to get rid of bad habit like exercising, meditating, and reading can be used to replace the bad habit. Thus, by doing all this method helps in solving all the individual problems caused by smartphone addicted and eventually will prevent society problems arise because most of the society problem is caused by individual behavior.