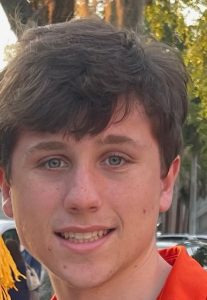 In the spring of 2019, my life changed forever. My father was coming to live with my family in Gainesville after completing rehab due to his drug addiction. He had not lived with us for over 13 years. He has lived with bipolar disorder for as long as I can remember and this played a role as a catalyst for his addiction. In the Summer of 2018, he stopped taking his required medication to stabilize his mood. He spiraled out of control into a manic state. In his moment of invincibility, my father became addicted to heroin. This is the hardest obstacle that I have ever had to face and it forced me to change my entire perspective on life and my approach to relationships. My father’s addiction also led me to take a bigger investment into my future.

Before learning of my father’s demons, I had never understood the reality of parents having their own struggles beyond parenting. I had seen my father’s behavior in the past, but I never realized what bipolar disorder truly was until he was living with me on a daily basis. When my father showed up to Gainesville in 2019, he looked like a ghost of himself. He had lost at least 100 pounds, the pigment of his skin was quite yellow, and his cognitive and physical functioning was weak. The roles seemed reversed and I became a caregiver to my father as I helped him recover. All of these changes made me mature much quicker than I anticipated. As I processed my emotions about my father, I found myself becoming more patient and compassionate with others. I realized the importance of kindness and checking up on people because you never know what someone is truly going through. Before my father’s addiction came to light, I was living my life recklessly. I was not taking my responsibilities seriously and I never saw the importance of my education. I also never contemplated the consequences of my actions because I never thought they would catch up to me.

As I saw my father deal with his recovery, I realigned my priorities in life. I placed education at the top of my list. As soon as I started to put all of my effort into my schoolwork, my grades improved drastically. I became more driven to excel in all aspects of life. I started playing lacrosse and it taught me discipline and a good work ethic. Being a part of a team gave me an outlet to help deal with my emotions towards my father and have people hold me accountable to my goals. I also started working in order to make my own money and learn better time management skills. I stopped surrounding myself with people who lived their life with no purpose. I grew closer to God which led me to become stronger spiritually. I was making these changes for a good reason and I knew I could overcome anything. I made all of these positive changes in my life as a way to cope with a myriad of emotions and thoughts I had in response to my father’s addiction.

I am hoping to be judged based on the past couple of years instead of the first fifteen of my life. I have morphed from a typical teenage boy who isn’t focused into a young man who has not only had to get it together, but also take care of the people that are supposed to take care of me. During the past two years, my growth has been exponential and I am hitting my stride as I enter college. I am excited and hopeful with my newfound desire, motivation and focus towards my future. I have learned not to make judgments and also not to give up. When the situation seems at its darkest, that is the moment to work the hardest.