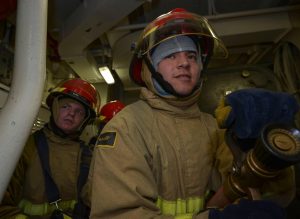 I am the son of an undocumented immigrant, and a child of a parent who passed away. I was on multiple occasions profiled by the police department for my appearance. I was handcuffed on 3 separate occasions without an explanation. People drove by and stared at me sitting on the curb, or even laying on my stomach, hands cuffed by my back as if I had done something wrong. After running my name, the only explanation I got was “perimeter sweep, thanks for cooperating” Or “We got a description of a Hispanic male wearing a dark jacket.” Here in San Diego, that could be just about anybody. If that wasn’t enough, I spent 3 years homeless because of my alcohol abuse in my early 20’s prior to my enlistment. I joined the Navy at 24 years old to have a warm bed, 3 meals a day, and steady income. Before I left for bootcamp, I drove out to a detention center in the mountains to say bye to my younger brother through a glass. I was excited for my new journey, but heartbroken that I was seeing him over those circumstances. Today, I am a 29 year old Navy veteran, full time student majoring in electrical engineering and current Navy reservist.

If there is one point I want you all to take from  my story tonight, it’s that your story is never done writing itself. The page in front of you is a clean slate with infinite possibilities. I know it may seem  hopeless at times. I know sometimes it seems as if there are bone crushing obstacles that you have to overcome, and it often seems like you are facing them alone. You are not. Others care. It is our nature to care.

I hit my rock bottom in a dive bar in Bremerton, Washington early on in my Naval career. I had just gotten word that my younger brother, released from his detention center maybe a month earlier, had already landed back where he started. It ate me away inside that I could not be there for my family or to talk some sense into my brother. As I sat there, self-medicating, I had become unaware of my appearance. I was clearly broken inside. I blamed myself. Had I set a bad example for him with my early drinking and tattoos?  Then, out of nowhere, a lady I had never seen before, and never seen since, tapped  me on the shoulder.

“Hey, I don’t know you,” she said. “I can see that you’re in a lot of pain.You look so sad. Please, don’t be sad. I just want you to know…. Whatever you are going though, it’s going to be ok.” She gave me a hug and walked away. I felt the lump in my throat. I started to fight back the tears. For years, I had been homeless. For years, I struggled with emotional abuse from a step parent while trying to wrap my head around the loss of my mom. For years, my family turned their backs on me because my drinking was so out of control. At the age of 19, I pawned the jewelry my mom wore the night she died for some cheap malt liquor. And yet at that moment, I never felt more vulnerable in my life.

The first thing I did the next day was march right up to my chain of command and ask for help with my drinking. I asked to go to treatment. I took my month of treatment serious. I was voted group leader. For two and a half years after, I white knuckled my sobriety. One fateful day, just 3 months before I was to leave active duty and transition to my new life, one of my best friends had an accident at work. He fell over the side of the ship, while in port, and landed on the concrete below. I don’t know if you  have ever seen an aircraft carrier up close, but it is not a short fall. He did not make it.

I did not know how to grieve. The death was so sudden, out of nowhere and without an explanation. I coped by self medicating again. About a month after the incident, I was in full relapse mode. I had lost almost 20 pounds from not eating.. I was removed from the barracks in a stretcher after a wellness check. I spent almost 2 weeks in another detox/ behavioral center a month before separating from active duty. I was diagnosed with major depressive and substance abuse disorders.I did not leave the military in my right headspace.

After spending my first month as a civilian doing some soul searching and adjusting to moving from state to state all over  again, I decided to enroll in school and use my benefits. I started taking classes at San Diego Mesa College Spring of 2020. 3 months into adjusting into my new life and trying to better myself every day, everything was turned upside down by the pandemic. Just as I was starting to put the pieces back together, I was being told to go back to isolating. I wanted to give up. I wanted to end it all. It felt as if it would be impossible to dig myself out of the mental rut I was in. I felt as though no one understood what I was going through.

Slowly but surely, however, I started to bring myself out of it by focusing on my biggest weaknesses. Instead of laying there defeated, I forced myself out of my shell by taking public speaking courses and argumentations courses at Mesa College. It felt a bit better to come out of my shell, but I still felt as though I was battling for my mental sanity by myself.

Then, out of the clear blue sky, my best friend and the one I would marry shortly after came into my life. Having someone who loved and believed in me made so much of a difference. She has been my biggest supporter in my journey for finding myself and my inner peace, but it wasn;t just her love alone. It was the way she opened my eyes to being more open to receiving help for my mental health. She opened me to speaking to professionals, therapy, meditating, and much more. I am now not too proud to admit that I am working towards improving my mental health every single day.

Your fellow students care if you are going through something and feel alone. The faculty, professors, and resources here at USD have been amazing. Everyone is so available and here for you and willing to help and do what is best for you. Please, I urge you to take advantage of your resources. The best advice I ever received related to my military experience was, “If you earned a benefit or have a resource available to you, don’t hesitate to use it because when it comes down to it the military will not hesitate to use everything it can out of you.” The same goes for here. If you have resources available to help you for any reason at all, do not hesitate to use them either  .