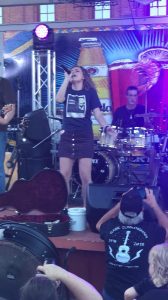 Please do not drink in his honor.

Would you bring the bullet casing to a shooting victims’ home?

Would you remind a widow she is all alone?

Why would you “cheers,” with the poison that took him?

He was trying to be there for his kids, and you sip on the reason he no longer lives.

There was more to him than that-

He had wonderful traits we cannot get back.

Don’t drink to my daddy,

Don’t celebrate the pit he was trapped in.

That is not what defines him.

Celebrate things like his hair- his voice- and the things he would wear.

The smile he planted and grew on each face.

Celebrate the shared laughter and his loving embrace.

The scratchiness of his beard when he hugged your neck.

The kiss on the cheek or a forehead peck.

His love for books, writing, and art.

The amount of guitar strings he played apart.

His heart golden and full of love.

Let him see US celebrate that as he watches from above.

Let him know he love the true Gabe.

One of the best men God has ever made.

Let it be good memories that we share at last.

I love you always Daddy,

I have two younger siblings on my mother’s side. On my father’s side I am the youngest. I have always had a tight bond with my father. He was not around much due to addiction and the complications that come along with it, but he was still very involved in creating the person I am today. He was an amazing musician with impeccable talent. He and I bonded over our strong love for Music, and he helped me hone into my own musical abilities.

When I was in eighth grade he and I started performing at local venues. I would get to go on stage with his full band and sing until I could not get another sound out. He and I both felt safe and at home on stage. I knew that I wanted to continue to make music with hm forever. I we started to get some local attention and were starting to work our way up to bigger shows this went on for years. Until August 18, 2018, my mother arrived at my place of work to inform that my father had been found dead and it suspected to be due to complications that com3 along with alcoholism.

My dad was in a rough place in life, he got excused from a rehab facility because he was having seizures from withdraws, and was experiencing liver failure, then the facilities that he had access to became inaccessible after the insurance changes that had been happening, with not being able to get treated, it made it even harder for him to find or keep a job, he was struggling finically and emotionally. Because of this terrible cycle my dad was forced to work low-income jobs (often could not get to work because of expenses and he had his license revoked) He was struggling financially to just survive. When I found out he had passed my whole world stopped. I best friend died, and we were finally starting to get going with our music. I did not know how to move forward, the following year I struggled with severe depression, I withdrew myself from my friends and my passions, I quit dancing, I quit singing, and I stopped being who I thought I was.

It wasn’t until quarantine when I began to see other people lose loved ones that I really woke up, what happened to me isn’t far, but it has happened to others before, I was so lucky to have such an amazing support system through my church and family. I would not have been able to make it through the day, music hurt my heart to hear, and watching my friends’ fathers give them away, or hold their babies made me bitter at first. After gaining perspective and putting on my big girl pants, I decided I was going to help children who have lost their parents and help the children who struggled with their emotions. I saw the cost of addiction and the affect it had on the family and friends of the one affected.

Addiction is a disease; it is a disease with a stigma. People who have never had a love one struggle with addiction may have a hard time understanding that addiction is not a choice. Addiction can a trait that children can inherit from their parents, addictive personalities are in their blood. Without proper coping mechanisms and professional care some addicts may not be able to really recover. You cannot recover alone, sometimes to recover addicts may have to reevaluate their friendships, who is a bad influence, they also must explain to that person why they cannot be around them; some people can drink recreationally stop when they know they need to and can go without it. Some people cannot, just like diabetics cannot produce your own insulin. Living in a small, minded town I as a child of an addict have also had to deal with the stigma, I have friends’ parents discourage their children from running around with me because of my father’s history. After he passed their parents still discouraged our interactions because they assumed I inherited his illness. They never knew who he was outside of his illness. They let it define him. He let it define him, the overwhelming guilt and the shame would only cause him to long for more escape, more alcohol. Because of the stigma my father was ashamed and even though he tried to get help he still felt that something was wrong with HIM. Because of the guilt, the shame, and the stigma I must walk myself down the aisle when I get married. My babies will never know their grandpa, and my future husband won’t have his blessing.

Addiction can be driven by guilt or shame, how can expect people to recover when they address their problem and the people, they love to make them feel guilty, dirty, or less of a person. How do we expect them to react to that? Often, it’s the guilt and shame that also bring people back to their fickle mistress, their poison of choice, when they are high or drunk, they can escape. When condemned by loved ones I would want an escape route as well. Which is why we need to teach healthy coping mechanisms, communication skills, and have better rehabilitation centers for people with low incomes, he did everything he could afford to do, and he still lost his battle. I am still fighting the war with his memory in mind, I know the pain and suffering from this experience will help me connect with many young people and be the safe place, and the listener they needed. If we can help kiddos learn healthy coping mechanisms we will have less adults with addiction problems, while I do not believe there is a full proof plan in the fight against addiction, but education is the first step in creating a cleaner brighter future.

My father and I had a love for performing, my whole life I planned on continuing my music career with him, after he passed, I struggled to pick up the microphone. This was the first time I had performed after his passing and the first time without him.