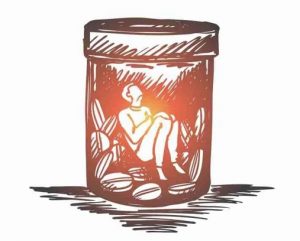 Addiction is the battle of losing yourself. In your mind you may think you know what you are doing and you have everything under control, but under the surface you are struggling to maintain the line of being in control and completely losing it. It does not help that whatever it is that calls your name is so readily available everywhere you turn.

Growing up, my parents were addicts. It started with something little and morphed into something so much bigger than they ever expected. Opiates. My father was in an accident when I was young, the wreck did some damage, and he was prescribed a lot of pain pills. Pair the abundance of opiates and the terrible childhood they came from, it was a destruction zone waiting to happen. Once the tolerance built up and the refills went out, the search was on for something to give them the same high or better. It became an endless cycle of waking up, looking for pills or other drugs, getting high and passing out. Whatever they wanted was so readily accessible to them it just became a question of how they could afford it. Even then that was not a problem, the demand for drugs and pills was so high, the supplier could afford to front them what they needed. It was just too easy for them.

My parents became a shell of who they used to be; however, it was not all bad. There would be days we woke up to my dad in the kitchen cooking us breakfast. Mama would pack lunches and we would have a picnic. We would have singing contest on the karaoke machine or dance battles in the living room. Those good memories are what made it so hard. We knew the people they were capable of being. When it came to getting high that was all that mattered, we were no longer important to them. Addiction affects every aspect of a person and when they are on the search to get high, they do not care about anyone else or anyone else’s feelings. Eventually, my mom overdosed on prescription pain pills. My dad was so high and messed up at the time that at only 12 years old I was the one responsible for telling my little sisters that she had passed. The entire week leading up to the funeral was spent babysitting my dad, praying he did not overdose as well. He was too far gone to care about anyone but himself.

Someone can become an addict through many ways. I think to help the crisis, people need to have the ability to be patient and understand why a person will go through what they do. I think it would help society to understand why substance abuse happens and instead of writing an addict off, more should be willing to help others in need. I also think there should be more resources for addicts needing help. Rehab is an option, but for a lot of people it is too expensive. Many people who partake in substance abuse at some point feel ashamed and the stigma around addicts makes it scary or impossible for them to search for help. I think opiates and other legal platforms that lead to addiction should be more controlled and not so available.

Even though things got tough, we never gave up on my dad and he eventually got clean. It took a lot of support from us and strength from himself to get through it. The years we all endured his addiction caused a lot of damage and we are still to this day working through it. But through dedication and patience we were able to get to the point of his recovery he is at today. Even though he has his days where it is tough, we are still standing beside him and encouraging him to push through the negative thoughts. Everyone, especially those in the worst point of their lives, deserve someone to stand beside them and help them fight.