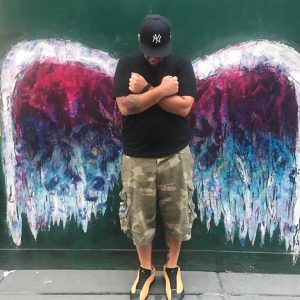 I have heard it said that our sense of smell is one of the strongest links to a memory. Reflecting on the past year of my life, I have learned this to be true.

Trader Joe’s Grapefruit Scented Candle–a summer exclusive. The last thing I smell before I would wake up to 10 missed calls from my mother who was about to share news that I thought I might be prepared for.

“I’m sleeping,” I mumble. “Can you call me again in ten minutes?”

She is no longer on the line. I am speechless, but this shouldn’t be shocking. How do you grieve someone you’ve grieved for twenty years? My brother was sick for most of my life.

Justin was twelve years old when I was born. His father struggled with addiction and was not in the picture most of the time, but what he saw of him was the ugly side of a person with untreated addiction.

The thing about addiction is that it meanders through bloodlines like a kayak on a summer day. The abuse he saw my mother endure from his father, the days that turned into nights while he waited for his father to come, the seasick car rides, the DARE program–none of those things could scare a chemical imbalance out of someone who has this disease in their DNA. It’s possible that my brother had bipolar disorder and was seeking balance. It’s even more likely that the PTSD he endured from these formative years exacerbated the need for drugs. The same things that broke my brother’s heart were the same things that made him want to seek drugs to mend it.

Marijuana and cigarette smoke. I do not know what drugs he started out with when he was a teenager, but I know that some years were better than others, and his clothes always smelled like marijuana and cigarette smoke–although when I was a kid, I did not know that was what the smell was. To me, it smelled familiar. Sometimes his pupils looked scary to me, but I knew not to talk to him when he looked like that.

Sweat. On the hottest day of 2016, we found out it was heroin that he had gotten into. It was my younger brother’s high school graduation. Justin was unable to attend to his daughter, so I was playing with her on the bleachers. He was sweating profusely in a wifebeater tank top and nodding off. After the ceremony at my house, he became very anxious and sick, and a family friend explained what she knew: these were classic and clear signs of opioid withdrawal.

At that point, Justin had a daughter. He lived for her. From the time his daughter was four years old, Justin was in and out of rehabs trying to get clean. At that point, she had seen a lot of what Justin had seen from his father growing up.

But rehabs are not a fix all, even for those who want a full recovery, like Justin did. Insurance would cover short term, 30 day stints at a time, and someone who is struggling with addiction, which rewires your brain and will make you do anything to get your next fix, may have figured out how to manipulate the untrained staff into thinking they are healed.

Justin often led group therapy. He inspired others. He won the hearts of the counselors, who gave him extra privileges and responsibilities. Then, they “graduated” him and let him leave.

According to the Commonwealth Fund, “the most recent data reflect September 2019 through August 2020. During that period, there were 88,295 predicted deaths, a record high that is almost 19,000 more deaths (27%) than the prior 12-month period.” My brother fell into the statistic of one of those 19,000 more overdose related deaths in 2020. He, along with many of those 19,000 people, was released from rehab to stay in a hotel room while he waited to be allowed into a halfway house. They were released with no in-person care, as this was the beginning of the pandemic. No therapy, no in person AA meetings. Justin had 8 weeks of rehab under his belt and then was left alone to die.

This is an epidemic. The counselors in rehabs are not sufficiently trained in addiction to make decisions on when to release patients or in creating sufficient aftercare plans, the rehab structure itself is outdated, and for a disease that affects well over 20 million people in the United States, there are still many taboos and misconceptions surrounding addiction.

The consequences and comorbidities of addiction speak for themselves. I watched family celebrations and holidays fall apart as my brother’s come-downs turned into screaming matches and fist fights, or sometimes DUI’s. I’ve seen my mother develop codependency that strained her marriage and relationships with other family members. I’ve seen the heartbreak in my little brother’s eyes when facing rejection from his older brother. I’ve seen the guilt and shame in my brother’s eyes when he sobered up. I saw my parents have to bury their firstborn son. I’ve seen my eight year old niece hyperventilate, eyes wide as she learned what cremation was–because that’s what happened to her father’s body.

On a communal scale, the impact of addictions is large. The sharing of and improper disposal of needles is a leading factor in the spread of HIV, HPV, and other bloodborne illnesses. Crime rates are high, hospital beds are used as a warm place to sleep during a storm because eventually, drug use prevents long term employment, which prevents access to housing.

I cannot say with confidence I know how to solve our country’s opioid epidemic. I can say that a lot needs to be done and it is the responsibility of everyone. Our first step is vulnerability so we can destigmatize this awful disease. Stories need to be shared about real people and by real people. Individuals should work to destigmatize addiction by seeking to educate themselves on what addiction is, what causes it, and what is wrong with the structure of rehab centers so that we can then hold government officials responsible for implementing the financial and structural changes these centers need. Schools do not need another DARE program run by police officers, but they do need solid mentorship in place and enough mental health and social workers present on campus.

Tonight, one year later, I light my Trader Joe’s Grapefruit candle from the seasonal section and I feel its warmth reflect off my tears. I light it for Justin, for each of the 19,000 additional deaths from the epidemic within the pandemic. And I share this essay with you for him and for all of them, too.