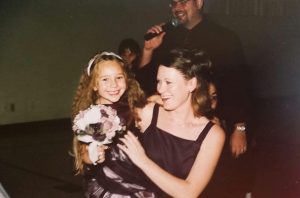 The Hole Left Behind

The Hole Left Behind

She was my best friend. My support system, my protector, my favorite person. I wish I remembered more of the early days, the days before it began. The days of watching movies and exploring nature, the days I was able to make her proud. Now, I feel as if there is a hole left inside me that can never be filled, regardless of others in my life who care about me. No one can ever truly replace the feeling of having a mother.

I don’t know exactly when the drinking began, but I could feel it in the way my mother interacted with me. I was only in elementary school when I would come home to my mom, on the floor crying and blaring sad music. I knew it wasn’t normal for her to guilt me into cuddling for hours on end. My mother and step-father began fighting constantly, often turning physical. Every day, I grew anxious of what I would come home to after school and eventually began skipping class altogether in order to protect her.

Those days, I felt on-edge all the time. In current times, I know I was experiencing anxiety and depression from all of the trauma. But then something changed in 2005. When my brother was born, I had a new purpose. My life did not consist of just taking care of my mom, but the parenting of my brother. I protected him from the fighting and drug abuse as best I could, while still being a rock for my mother when she inevitably broke down.

Eventually, my grandparents fought for custody of my brother and I. The court battle came after the stint in which my mother hid my brother and I from my grandparents in motels with another abusive boyfriend. Changing to a new home was hard, and even though I was relieved from the pressure and anxiety of caring for my mother, I felt overwhelmed with guilt and sorrow. My mother was spirling and there was absolutely nothing I could do.

There was a brief period of time where my mother was sober. Well, a good three years or so. Her period of sobriety felt like God answering my prayers that my mom would see how much hurt she had caused and make changes for her kids and family. My brother and I would go on visits with her and eventually began talking about reunification. Unfortunately, my mom began dating again and entered into a world of abuse and alcohol once more.

I remember that day and always will. My mom seemed unusual and had a glossy look in her eye. I wanted so badly to ignore the feeling in the pit of my stomach, but when she said she would drive my brother somewhere (and this was not the first experience with her driving us while drunk), I panicked. My mom began to get emotional, dragging my brother into her behavior and I could see it: my brother was me. I felt like I was looking into a mirror, watching him care for her in the way I had for so many years, destroying him slowly. At that moment, I knew, my relationship with my mother was toxic and I needed to get out.

I wish the story ended more positively, but addiction isn’t clean like that. There were so many days of ups and downs, so many moments of triumphs and failures, but I couldn’t fix my mom in the end. It has been five years since the last time we spoke and time does make it easier, but there is not a single day where I don’t think about her or wonder what I could have done better.

Addiction is a complicated and horrible disease. Not only does the person suffering from addiction face consequences, but those around them are damaged as well. I was an adult by the time I realized that my mother’s addiction was something she needed to face and nothing I could say, ask, or do could change that fact. I spent years being codependent on my mother because of all the emotions twisted inside me, unclear and confusing for a child.

I don’t hate my mother. I feel incredibly sad, angry, guilty, frustrated, and so many other emotions about the situation, but I no longer feel resentment towards her. I still carry around this small hope with me that one day, she will find the support to get better, but I do not force myself to play that role.

I worked hard in high school and was accepted at the University of Wisconsin-Eau Claire for a bachelor’s degree in psychology. Through the program and therapy, I learned so much more about addiction as a disease and how complex trauma contributes. I think my mother had mental health concerns and so much hurt from years of abuse that I didn’t see, trauma that pushed her to seek pain relief in the form of alcohol. My mother is a victim of a mental illness that we shame as a society and lack the resources to address.

Currently, I am in the master of social work program at the University of Wisconsin-Milwaukee. All the trauma in my life pushed me to join a helping field, and I have big dreams for the future. I want to be able to help those with similar experiences to mine, those with complex trauma that is confusing to understand and comes out in harmful ways. Children have the right to feel safe and loved in their home, just as those with addiction have the right to treatment without punishment. My hope for the future is that we can create a world of acceptance and support for all.