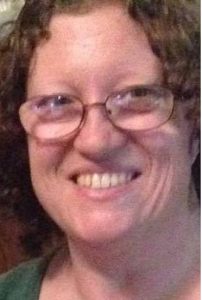 Growing up with a severe mental illness is indescribable. There is no way to describe the decades of fighting to remain stable enough to maintain a healthy relationship, raise my three children, and hold a good paying job. I did it for many years. Until the defining day, September 10, 2010, when I could not do it anymore.

In 2012, when I was granted disability and received a lump sum, I moved to Florida. I believed as so many do, that I could leave my problems behind. After a couple of years, may two daughters, who had come with me, returned to New England. For the first time in my life, I felt completely alone. Although, I was living with my parents, I did not feel they understood me or supported me emotionally. I was 272 pounds, broke, disabled, and lonely.

One day I decided to find others that will understand what I was experiencing. But where? I heard about a NAMI support group in my area. It took me months to go to my first meeting and when I did, I cried the whole time. After a few meetings, some members talked about being in “Recovery.” My mind immediately went to addiction recovery. This was not the case. They talked about Mental Health Recovery. My anger over this “secret” I felt that was kept from me, fueled my Recovery.

As I got healthy emotionally, I got healthy physically. After undergoing weight loss surgery, I realized that I had an eating addiction. I attended Bariatric Support groups to support me in the new lifestyle change. At first, I was the most compliant member there was, no sugar, no carbs, and most importantly no alcohol. It did not bother me. I never liked the taste of alcohol anyway.

In the group I heard of the dangers of “Switching Addictions.” Some people became sex addicts, shopping addicts, and alcoholics. A close friend, like myself never drank until after her surgery. I always felt that I had enough problems in my life without drinking, smoking, or doing drugs.

When I began my work in the Mental Health field, I learned that the majority of people who become addicted to substances are self-medicating a mental health disorder that they may not even know exists. I know that I self-medicated with food. I received had comfort from eating but after my surgery I lost that comfort. Food had been my drug.

There came a time when nothing tasted good to me anymore. Eventually, I found no pleasure or satisfaction in anything that I ate. One day I tried Fireball Whiskey. That was the flavor that finally satiated me. I knew the extreme damage that drinking would cause to a person who has had Bariatric surgery.

When I decided it was time to quit, I knew that I had to go to detox because of the physical addiction caused by the alcohol. I told them that I was addicted to the taste of my chosen drink and I was accused of being in denial. They could not believe that I drank for the taste and not to get intoxicated. I rarely drank anything else. Even when I had other alcohol in the house, I had no desire to drink. My addiction was related to my oral addiction which had caused me to overeat. You cannot possibly understand unless you have had an eating addiction.

I finally overcame my drinking problem, simply by learning to not allow Fireball into my house. I still struggle with food, at times. The thing that some people do not understand about eating disorders is that you have to eat to survive. If you are addicted to alcohol, drugs, or cigarettes you can choose to avoid them completely. Food is everywhere. Every social event, every holiday gathering, and every celebration revolves around food. People tell me “Just one bite of cake won’t hurt,” however, the same people would never think to say to an alcoholic. “Just one shot won’t hurt.”

The moral of my story is twofold. One, there are so many types of addictions. Be respectful of the challenges that people with non-substance addictions face. In some ways their struggle may be grater. Two, if you beat one addiction, do not be the person who says, “That will never happen to me.” Instead, be cautious not to fall into another addiction that may be as dangerous as the first.