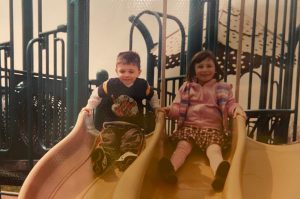 My Brother Is Going To Die

My Brother Is Going To Die

My brother was my first best friend. He was my first confidant, my first role model, and my only sibling. I am three years his elder, yet he was always brighter than me, funnier than me… better than me. But by the time I reached eighteen, my little brother was slowly but surely fading. In eighth grade, he started dealing weed. He smoked regularly, and I had a feeling he was experimenting with opioid pills as well. I wanted to control it.

Becoming a mother has never been one of my goals. I know I come from a family of addicts, so who’s to say my child wouldn’t be one too? My uncle was an alcoholic. He got drunk and shot himself in the head a few years ago. Even in our final moments together his addiction outshined him. My last memory of him was his gravelly request for me to “pass him the cigs” as I plugged my nose into his shirt to block out the smell. My cousin had a similar fate– a drug overdose in a trailer, leaving his wife and eight-year-old daughter behind. Come to think of it, his wife was an addict, too. She died in a meth lab explosion. So no, I never wanted to be a mother. But for my brother, I tried.

I tried to teach him, guide him, help him. To him, I was overbearing, and he was right. But by the second semester of my senior year, he had entirely faded into someone I could no longer recognize. He was sixteen and using heroin. At the time, we were living in a “safe” Atlanta suburb, but there was a secret sickness that acted as a blockade around this whitewashed town– The Heroin Triangle. This infamous area was known to have a disproportionate number of heroin overdoses every year, especially in the youth population. Unfortunately, my brother was one of those kids.

I remember the events of this day so clearly. I had gone through the mail and found an envelope addressed to my brother. Immediately, I felt a sinking feeling in my stomach, and although I cannot explain why, I can say with certainty that I knew something was wrong. With my father’s instructions, I opened the envelope to find two large packets of powder, one darker than the other. My instincts told me it was heroin, and I was right. I told my mother, who locked it away in a safe, which somehow, my brother got wind of. Within moments, he had escaped my watch and ran away with it. All I felt was sheer rage. I never thought that this moment had the potential to be the last time I ever heard him alive. We filed a missing child report, but by morning, my mother and I were met with bad news.

It had to be about eight AM when the police knocked at the door. We were quickly told that my brother was found, and was suffering from “shallow breathing.” I knew he had overdosed. I think that was the moment when it really clicked. The walls looked like they were moving around me and my heart was racing and I think I cried for eight hours. He had died– momentarily. Just as he had taken his last breath, he was given two doses of Narcan, which revived him. A helicopter took him to a special hospital, where he entered the ICU in a coma. When I saw him, he was blue. He looked dead. It was days before he woke up, and from there he was transferred to several rehabs, where ironically, he continued to abuse drugs.

I believe the severe lack of sufficient rehab centers has much to do with the nation’s increasing addiction crisis. While my brother was in those facilities, drugs were smuggled in, and by any means, the patients found ways to get high. They even went as far as huffing wallpaper dust, unsupervised. These rehabs truly do not care for their patients as they should. A lack of proper care is partially to blame for our nation’s drug crisis, or at least for its perseverance. As for the catalyst of these addictions, I can only speculate that aside from genetics and environmental conditions, a lack of trust and understanding between families and friends is a major contributor to the crisis. I truly believe that if I had approached my little brother with more kindness and less judgment, we could have addressed his opioid addiction before it led him to not one, but now two overdoses.

Now, I still can’t help but believe that with any amount of nurturing or rehab, my brother is still going to die. It feels like a constant threat at the forefront of my mind, but truthfully, no matter the degree of pain and turmoil my family and I have felt watching him fade like this, I know that for him, it is far worse. Addiction is an everlasting illness that must be fought off for life. If I had any advice to families or people dealing with something like this, I would say please don’t brush it off. Please don’t think it’s “just a phase” or “just weed” or anything less than a crisis. Stopping it before it starts would have been the ultimate solution, but now, the best I can do is love my brother, and hope that he doesn’t die.