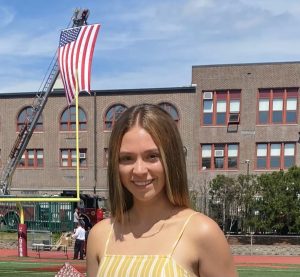 My name is Dorothy Anderson. I am a freshman at Caldwell University majoring in nursing. I graduate May 2024. I will graduate with a BSN and then I will sit to take my NJ state nursing boards so I can become a registered nurse.

I am nineteen years old and I live with my mother and two older sisters (21 and 22). On September 29, 2002, Just days after I turned 7 months old, my father had a psychotic, drug induced breakdown and he stabbed my mother in the face, neck, and arms with a large kitchen knife. My mother’s screams woke me and my sisters up. My oldest sister grabbed me from the crib and ran to kitchen just as my father started to stab my mother. So, were all present as he tried to kill her. After he dropped the knife, he grabbed my oldest sister Jamie and ran from the house, leaving my mother in a pool of blood an me in her arms crying. My sister Mary just stood staring. Neighbors called 911 for my mother and paramedics took her to the hospital with me and my sister Mary. The police placed an APB out on my father and my sister Jamie. My father left Jamie at my paternal grandfather’s house and ran in fear from the police.

My mother received over 500 stitches about her face, neck, and arms. She spent that night in the hospital, and we were sent to stay with our maternal grandmother in New Jersey safe from my father. The next day, the police caught and arrested my father. He was later found guilty of 1st Degree Assault and 3 Counts of Child Endangerment. He was sentenced to 10 years in jail and they placed a restraining order against him barring him from contact with me, my mom, and my sisters. When I was 12 years old, he was released from jail. But his freedom didn’t last long. He started using drugs again and was rearrested for assaulting my paternal grandmother and girlfriend at the time. Since, then he has been in and out of jail for probation violations, too. Last time I heard, he was living on the streets in New York City somewhere.

Growing up, I dealt with night terrors and the daily fear that my father was going to be released from jail one day and return to finish up what he started. To say the least life hasn’t been easy for me. During middle school I was diagnosed with Anxiety, Depression, and Suicidal Ideation. But during my sophomore years of high school, my principal asked me to attend the Bergen County Youth Summit. It’s a program that involves teens and professional adults, they talk about how to deal with social pressures, mental health issues, bullying, alcohol and drug addiction. What I learned from then I then shared with other teens who were experiencing the same.

I learned to listen to what people say and do and how to speak with them about their feelings. Mentoring teens like me and middle school students helped me to understand my self and what I wanted to do with my life. I arranged with the principal and some other staff members of the high school to restart our Heroes and Cool Kids program at the high school and I became a member of the NJ State Elks Peer Leadership program. As a senior I began an internship with my high school nurse working one 8 hour shift a week helping out in the office.

I gained so much insight about myself and those around me. Helping others allowed me to be more confident in everything I did and It helped me to decide what I wanted to do with my life. Becoming a psychiatric nurse specializing in teens and young adults will allow me to help people just like I was when I was lost, confused, and depressed. I think my experiences in life will guide me through the ups and downs of college. I know I can withstand anything that comes my way, all the obstacles that I may endure in college and passing my nursing boards.