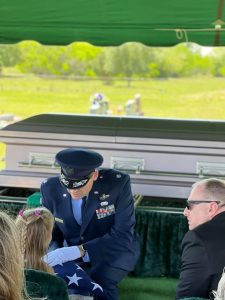 Her Mom’s Gone, But Her Future Isn’t

Her Mom’s Gone, But Her Future Isn’t

For a long time, people have tried to cope with their demons through their vices. It is not a new issue, but luckily, since society has grown aware of how impactful and important mental health is, we have been getting better at recognizing when we need help, when others need help, and we have been getting better at forming ways to help ourselves through healthy practices like therapy, mindfulness, and self-care. Unfortunately, these healthy practices can pass some people by because of their culture and economic class. Some were raised by guardians who discouraged talking about feelings, while some have too much financial stress weighing them down to consider therapy. Others simply feel they have no time to focus on their mental health.

Whatever the reason, people slip through the cracks and develop an addiction. They can get addicted to any number of things, but whatever this thing is, it causes them to lose their grasp on reality until they are no longer themselves. All of a sudden, the things that should matter to them the most don’t and what is keeping them from living is valued above the rest. Now more than ever, our nation is faced with an addiction crisis. In order to put a stop to it, we need to consider what might be causing this rise in addiction and what might flatten the trajectory.

The past year has been tough for everyone. We have had to be inventive, resourceful, and clever figuring out how we can do our jobs from home while in quarantine during the COVID-19 pandemic. We have been shut off from our regular sources of social interaction, so we turned to social media to fill that need. Social media is known to portray only the best parts of peoples’ lives, making the viewer feel less than their peers. Many people have felt depressed being trapped, in a sense, at home and closed off from their friends and family outside of the home. This certainly must have something to do with the addiction crisis. Depression has certainly caused people to turn to drugs, alcohol, and other vices that would help dull the feeling of emptiness. I was reminded of my fortune when I was made aware of devastating news a few months ago.

A mother of a child not yet in elementary school had left the world by her own choice. She was a friend of the family, a distant relative of my cousins, and I went to the funeral. Speculating a specific mental disorder would be disrespectful to her memory, but she had struggled with mental illness throughout her life, having admitted herself in a psychiatric hospital on multiple occasions. She held an E5 rank in the U.S. Army before coming home and working as a Caseworker for the Children’s Protective Services. She had two jobs which, no doubt, had an impact on her mental health. These are two jobs which are notorious for triggering Post Traumatic Stress Disorder in people, but they could also trigger co-occurring mental disorders. Being out on the field where bombs go off is no easy feat, and neither is learning a new child abuse case weekly, if not daily. It would surely take a toll on empathic people.

Being at the funeral, the only thing I could think about was how the little girl is going to grow up without her mother. I kept wondering if she could manage to grow up happily without her. I hoped that she would be okay. She was oblivious to her surroundings. She did not completely understand what was happening yet, as she was dancing and twirling in front of the pews next to her mom’s pictures on canvases. I imagined how it would hit her later that she would never see her mom again and I was glad that she felt like a child still on that day. During the graveside service, a lieutenant colonel saluted a few soldiers who folded the flag into a triangle, and he kneeled down to be eye level with the little girl. He said he was honored to bestow the flag to her and she held on to that flag as if it were her own mother. I did not know if she understood why he was giving her the flag, but I know she knew it was special. Even though the girl was without a mom, she had a dad, grandparents, cousins, and friends who loved her and would look after her. I hoped this support would be enough to give her a good life.

There are layers for the “why?” There is never one reason for why people develop addiction. It has to do with biological/genetic factors, and it especially has to do with environmental factors, as we found out this year. If we, as a society, are to help reduce the rate of addiction, we need to turn to how we can create a healthy environment for ourselves. Since we are a largely technology-based society now, that means being sensitive to what we put out for viewers to see in TV shows, movies, TikToks, for listeners of podcasts, radio shows, and more. It does not necessarily mean censorship, but it should mean that we acknowledge when media can be damaging to someone’s health and start displaying a warning at the beginning of the video reserved for first-person mentally ill depictions. TV shows which romanticize drug addiction and story-tell from the addict’s perspective should be careful about how that depiction affects impressionable, young people and addicts themselves. If we stay mindful of the danger of the romanticization of drugs in media, we can prevent younger generations from adopting the same idealization of substance abuse as the main character. In addition to media sensitivity, society could help the addiction crisis by continuing to dissolve the therapy stigma and making therapy more accessible and affordable for everyone. Society has always evolved and it will continue to evolve, hopefully for the better, but we need to be willing to adapt and consider changes for the better of all first.