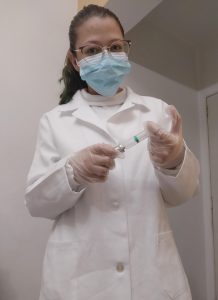 I watched as my own father tried to kill my mother. He was drunk; he was always drunk. In fact, I was four years old and I could not recall ever seeing my father sober. I was the one to call 911, hidden behind the leather sofa, as my mom impetuously closed the kitchen door behind her. I remember hearing my father’s death threats from the other room, as I tried to explain to the police on the phone that he had a knife and was attempting to end my mother’s life and his own. It was January 17, 2005. It was not the first time I had to call the police to rescue us, and unfortunately, it was not the last.

I did not see my father for a whole year, while he was admitted to a rehabilitation clinic for drug and alcohol addicts, after repeatedly attempting suicide. That year, I was diagnosed with panic syndrome, followed by social anxiety, attention deficit and hyperactivity disorder, borderline, and Asperger’s – an autism spectrum disorder. I believe it was arduous work for my mother to deal with numerous events simultaneously and maintain order at home, with a daughter who required special attention and medical treatment.

My father left the rehabilitation hospital in late 2005. He looked better, healthy, even sane – I dared to say. My parents made the precipitate and erroneous decision to get back together. The resurgence of my dad’s addiction came as soon as they found out that my mother was pregnant with my sister, Carolina. His incessant desire for opioids and alcoholic substances was burgeoning his addiction again. The watershed happened when he was charged with inadvertent injury, after hitting my mother’s stomach and causing pregnancy complications. After that, my mother finally realized her husband’s dependency was entrenched and, thus, she asked for the divorce.

Concomitantly, my diagnosis process continued, while several health professionals tested my social, intellectual, and sensory abilities and skills. Ever since I was young, I was encouraged to participate in mathematical and scientific activities, with other children with psychological disabilities. I went to private schools my whole life, being under constant supervision of the professors and the staff. I had tough kindergarten years. My inability to maintain social interactions and develop meaningful connections prevented me from talking to my colleagues. Books, texts, and the periodic table became my best friends, as sad as it seems. I found refuge studying and feeling like I was the smartest – yet youngest – member of the family.

Then high school came. I am an ambitious girl; overall, self-critical. I have always wanted to push myself to my limits and, more than any other thing, make my mother proud. I was fifteen when I decided I was going to apply for colleges and universities outside of my home country, Brazil. While in regular high school, I was also in a three-year Administration technician course, to ensure I would be able to start working as soon as possible and contribute financially to my studies. I participated in several olympiads and programs like the Brazilian Mathematical Olympiad, the Science National Olympiads by the Ministry of Science, Technology, Innovation and Communications, and the National AP Scholar with Honors Awards. I was enrolled in the Honors Program while in high school, graduating with seven honors and eleven AP courses.

I was highly satisfied with my academic achievements. I had a 4.20 weighted GPA, ranked as the best student of my class. I had participated in several rewarding extracurricular activities, including a scientific project recognized with honorable mention by the best university in Brazil, volunteering, the Model United Nations, the Girl Scouts Organization, and a paid job. I took the SAT, the TOEFL test, and the time to apply for colleges arrived. While the deadlines were approaching, I had a terrific event in my life that changed me in many ways. I lost my Emotional Support Animal, Amora – whose name means blackberry in English. The following months were filled with medical appointments and consultations to diagnose one more psychological disorder: depression.

I could not bring myself to finish my college application. Amora was supposed to accompany me everywhere. After her death, I was terrified to pursue my dreams in a completely different country, without my family by my side or properly speaking the language. It took me a couple of months to finally get out of bed and get done with the mourning and the grief. However, therapy helped me get back to my feet and I manifested the urge to continue my college applications for the first time. Time had passed though. I could not remember the steps to follow, words that I had learned, subjects I had studied for the tests.

I lacked confidence. I was so unaware of my own capability that I doubted every single strength I had and so I decided to take another gap year. Many uncertainties were making me question the whole plan I had for myself. During the years of 2018 and 2019, I worked and gathered enough money to survive in New York for a while. When I felt like I was ready to try, I translated all my documents, took the assessment tests, and filled out the Common Application. College’s letters came in and I made my decision. I was going to St. Francis College, a small school in New York City.

My major? Undecided. I knew I was supposed to pursue a career in the field of science. However, I truly had no clue which area I should prioritize. Spring 2020 came sooner than expected and I found myself sitting on a Coney Island bench. It was probably 20 degrees Farenheit that day, but taking the F train to Coney Island had always been my ultimate dream. I started my Chemistry studies and volunteered at a rehabilitation center, where some professionals were conducting experiments on a scientific subject called “Neuropsychopharmacotoxicology”.

Long name, I know. But it is actually quite simple to understand: neuropsychopharmacotoxicology is the study of toxins, poisons, and drugs and how those chemical substances affect people’s mind and behavior. I was fascinated by the idea. The proposition of developing a medicine that would, at the same time, fulfill the psychological and physical dependence on individuals with addiction and treat them to stop their desire for opioids enchanted me. Therefore, I started to observe and quietly participate in the study altogether with incredible neurologists and psychiatrists. I realized I could continue my studies in health sciences, focusing my specialization in the field of Neuropsychopharmacotoxicology.

Unfortunately, my visits to the rehabilitation center and research on neurotoxicology and psychopharmacology were interrupted due to the coronavirus outbreak. My parents could no longer afford my tuition and fees, after losing their jobs in the first months of the pandemic. I was sent home, back to Brazil. The American dream was over.

Taking a leave of absence was one of the hardest things I have ever done. When I felt like things were finally looking up, I encountered an obstacle. However, this time, I was not going to run away from my dreams and goals. When I came back to Brazil, I saw my father again after almost a decade. This time, therapy had been useful for him as well. He was admitted into CAPS, a psychosocial integralization program in Brazil, for over two years, where he was treated and started his studies again.

He was finally sober. After his addiction treatment, he was able to pursue an undergraduate degree in Engineering Sciences and is now concluding a postgraduate degree in Naval Mechanics. The way he overcame his obstacles inspired me to do the same. I took the opportunity life gave me and dedicated the year of 2020, while quarantined, to apply for college one more time.
For the Fall 2021 semester, I was admitted into Columbia School of General Studies, where I will pursue a double degree in Neuroscience and Behavior and Human Rights, with a Public Health concentration. My main career goal is to work alongside children and families of low-income communities, in order to guarantee their safety, health, and ability to maintain themselves in the right educational and professional paths, free of substance abuse – so other people don’t have to be raised in a household with an addicted parent like I did. Although all of these are basic human rights, not everyone is treated the same, being neglected and forgotten by our government and private organizations. It is our duty as advocates to ensure good quality of life for those who are unable to speak for themselves.

My personal and career goals to become a renowned professional in the field of Neuropsychopharmacotoxicology are to ensure that no other child will have to go through what I did when I was little, living with an addicted family member. Even though my father has been sober for over 10 years, I became familiar with the routine of dependency and I constantly live with the fear of losing a parent to addiction or subsequently violence. The path I am choosing right now will actively prepare me to be successful, studying the reaction of drugs, toxins, and substances in the neural system and preventing unpleasant situations caused by addiction; thus contributing to a cleaner and safer society for all.