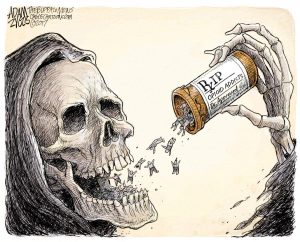 Drug abuse is one of the many causes of deaths around the nation. Addiction is one of the major causes of homelessness and the increasing poverty rates. Tons of people all over have been or are addicted to some type of substance to the point where they cannot function without them. This can mess up their physical, mental, emotional, and financial wellbeing. In the year of 2020, the country was in the midst of a major drug epidemic that had killed almost a thousand people a week. It’s also caused severe economic damage. The rate of usage of the medication sparked as the pandemic rose in the United States. Mental health if a huge factor in the abuse of substances. Citizens as young as 12 misuse drugs to escape mental illnesses such as anxiety, depression, bipolar disorder, and many others. Minors often try under peer pressure becoming addicted. Other citizens have adhd or get hooked on steroids. Addiction can form through influences, traumatic situations, or surroundings.

Substance abuse affects and costs the individual, the family, and the community in significant ways. In my situation I have a great aunt who misuses drugs. I don’t think she does it intentionally but because her body is dependent it’s hard for her to quit. I myself didn’t know she was on drugs. I found out that she has struggled with addiction since the 80’s. It has affected her physically she has patches from needles that she used to inject into her four arm she often gets embarrassed and wear long sleeve shirts or arm bands to hide her scars. When I was younger, I would notice but I thought it was just allergic hive reaction. Mentally drugs have caused her to make decisions that are very irresponsible for ex, giving my little brother beer at the age of two. The use of drugs has costed her in multiple ways including loss of productivity and unemployability. There have been numerous times where she would ask for money. She would tell me her check didn’t come in or the company wasn’t treating her fairly. I gave her money and when I say money, I mean big bills like 20’s every week or other week. She would tell me that she’s going to pay me back but after I gave her the money she would disappear. I never questioned giving her the money because she looked out for me, but it kept happening continuously. As a kid I had money but not money to be giving away to my grown great aunt. Impairment in physical and mental health caused constant lashing out or uneasiness. There was a reduced quality of life in her, back in the day when a cousin of mine was younger, she witnessed our aunt with a needle in her arm almost unconscious. Finally, the cost of expenses for treatment such as medical bills hurt the families pockets especially when everyone continuously put out money and has their own responsibilities to take care of.

The problem is we look to solve every problem we have with some type of medicine. Medicines are made to “help”, but it also contains tons of chemicals and other things that enter our bodies which affect our day to day with out us even knowing. Natural remedies can be used in place of medications which gets abused anyway. We are trained as a society to believe it will make us better. The government should increase the affordability and accessibility to drug treatment centers/programs. People who are actually serious about treatment is not able to receive it because it’s too costly.