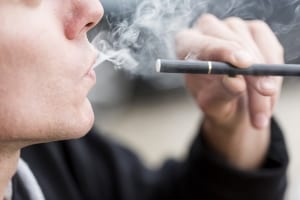 Many people who are habitual smokers are desperate to find ways to quit. Almost more than any other type of addiction, people who smoke start young, and smoking becomes an everyday part of life. People become used to taking cigarette breaks, socializing around smoking, relaxing with smoking, and find it hard to replace the emptiness and cravings they feel when trying to quit smoking. Nicotine patches and hypnotherapy are popular ways to help someone curb smoking addiction, but e-cigarettes (electronic cigarettes) have gained popularity as an alternative to smoking regular cigarettes. E-cigarettes are promoted as a harmless alternative to smoking regular cigarettes with nicotine. However, scientific research is showing that e-cigarettes are not as harmless as people have initially believed. Despite this, the e-cigarette industry has ballooned into a massive two billion dollar industry, so there are apparently many people using e-cigarettes, either as alternatives to regular cigarettes, or for recreational purposes.

Concerns About The Safety

E-cigarettes are metal cylinders that are battery-powered and use a mixture of chemicals, including nicotine. And while people may smoke them as a way to quit smoking regular cigarettes, the FDA classifies e-cigarettes as another tobacco product, and not as a method of quitting smoking, such as nicotine patches. Moreover, some reputable health organizations such as the World Health Organization have raised serious concerns about the safety of e-cigarettes. On the flipside, marketing the popularity of e-cigarettes as a safe alternative has gone viral. And this has caused health groups to bring up safety concerns about e-cigarettes, such as:

One of the other major concerns about e-cigarettes is that since they also are harmful, the user is essentially trading one addiction for another. Instead of partaking in a safe alternative, the e-cigarette usage can potentially develop into another long-term addiction with harmful consequences. This is why health experts are trying to emphasize that e-cigarettes are not as harmless as advertised.

The U.S. Senate has even become involved when it comes to warning about the dangers of carcinogens. The U.S. Senate is concerned about the carcinogens that the electric cigarettes produce when they get hot. More research has shown that when the e-cigarettes get hot enough dangerous chemicals get produced. These include formaldehyde, and other cancer-causing chemicals that can prove to be dangerous, particularly after long-term usage. These carcinogens also raise concern that second-hand smoke, just like with regular cigarettes, can be dangerous to anyone who is inhaling the smoke.

And on the flipside, people who advocate for e-cigarettes argue that while there may not be conclusive evidence, they can still prove beneficial to people trying to stop smoking regular cigarettes. The person’s mindset is what might make the difference. Aids that help people quit smoking are a billion dollar business, from nicotine patches, to hypnosis or acupuncture, and e-cigarettes may be useful if used in the proper manner to help someone quit smoking. The government will continue to do research on the pros and cons